At school, classmates made fun of Mike Dancer for being the tall, lanky one who had bad coordination. Burned with low self-esteem, Dancer only went into a gym for the first time at university. To his surprise, he liked it, so he kept going back, becoming a gym instructor and personal trainer.

Then one day, everything changed.

When an epilepsy diagnosis and the promise of progressive brain damage threatened to end his career and his quality of life, Dancer searched desperately for something that could help. A chance meeting on the Bodybuilding.com forums with Dr. Dominic D’Agostino, a legend in the world of ketogenic dieting, led to a miraculous transformation that brought Dancer back from the brink of despair.

Through a strict keto diet, Dancer has built an unusual lifestyle and an enduring friendship. We caught up with Dancer just days after the 13th anniversary of his conversion to the keto diet to find out how this unique approach has worked for him all these years.

BBCOM: Can you tell us about your condition and what led you to the keto diet?

Mike Dancer: On September 8, 2000, I was managing Fitness Services at the University of Birmingham (UK) when I suffered my first convulsive seizure. I had no recollection of been taken to hospital in an ambulance. I was diagnosed with epilepsy and given anti-epilepsy drugs that I’d need to keep taking for the rest of my life to stabilize the biochemistry of my brain.

Neurologists went on to say that I would suffer progressive brain damage and would slowly die over the next 5 years. The anti-epilepsy drugs that they gave me couldn’t stop further seizures—they became more frequent and more severe. My dosage increased, which led to increasing side effects.

My endocrine and immune systems were impacted, and my memory was destroyed. Additionally, I developed progressive food intolerances. First it was wheat, then dairy, then yeast, red meats, citrus, nightshades, soy, and sugar. I developed pernicious anemia—my gut could no longer absorb vitamin B12. The list seemed to be forever growing.

I asked if I could reduce the amount of anti-epilepsy medication I was taking. I was told that this would lead to a more rapid death. I chose to face rapid death with the capacity to recall my own name, with the capacity to say “goodbye” to my family and friends in a lucid manner, rather than to live for longer but be unable to remember how to speak. So, I gradually stopped taking all medication. The seizures worsened and I got ready to die.

By this time, I had stopped working and was receiving disability benefits. There was one gym that was prepared to accept me as a member (there are many in the UK that still won’t—they see me as a health and safety risk), so I started strength training. Thank you to the Workshop Gym at the Lido, Guildford!

I recorded my progress on Bodybuilding.com and I communicated with other people who used the forums there. One user called dpd555 asked if I’d ever heard of the ketogenic diet. I hadn’t. He explained that it is an approach that was used for children suffering with frequent, bad seizures back in the 1920s and 1930s before anti-epilepsy drugs had been invented. This approach had been abandoned for a number of decades but was now being used once more, particularly for children when anti-epilepsy drugs had no effect. The diet produced impressive results.

On July 15, 2008, I put this into practice. Over the months that followed, we realized that my seizures had reduced, remarkably. Additionally, I recovered much quicker from the few that I did have.

How were you able to make such an extreme change?

I keep a constant food diary. Every gram of every ingredient that I ever eat is recorded in a spreadsheet that calculates the amounts of protein, carbohydrates, fat, and fiber held in all those ingredients, for all of those meals. This gives an accurate picture of what I am eating.

Initially I was surprised by the amount of “hidden” carbohydrate contained in the foods I was eating. I wanted to “convert” my brain and body to use ketones rather than glucose. It was like shifting from gasoline to diesel for a car, but in my case, we were converting human metabolism—all those mitochondria!

To get my liver to produce these ketones, I discovered that I had to reduce my daily carbohydrate intake to 20 grams a day. It was not easy—it meant cutting out a lot of foods, leaving me with few vegetables and fruits. I’d developed intolerances to nightshades and citrus fruit, which left me with only leafy, green vegetables such as broccoli, asparagus, avocado, and spinach.

In terms of fat, I had a dairy intolerance but still needed to avoid ingredients that didn’t exaggerate coronary heart disease—and that didn’t include hydrogenated oils or trans fats. So I chose oily fish, coconut oil, Brazil nuts, and walnuts.

You went from “ready to die” to stepping onstage and competing in a bodybuilding show. That’s an incredible turnaround. How did you manage it?

I found that once my stored glycogen had been used up, I was no longer able to manage endurance training to the same intensity as I had before. Long, slow aerobic training (e.g., walking) was fine, so was very intense power/strength work.

It was evident that with all the changes I’d made, my body fat levels were decreasing and my muscular definition was improved. I resisted the idea of competing at first. It meant going back to that teenage insecurity about my appearance and competence, which I had used the gym to avoid over the years. 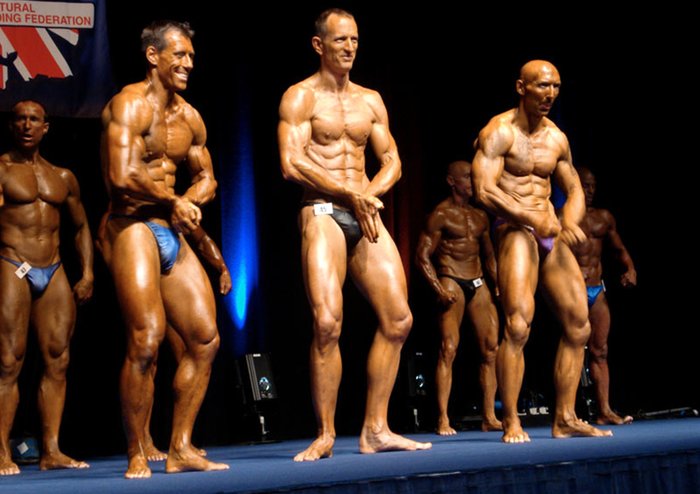 Gradually, with the encouragement of the people I’d met online and many others, I discovered “meaning” for my life—I dissolved away my “death sentence” epilepsy diagnosis and decided to enter a bodybuilding competition in 2009. Yes, I felt terrified leading up to it, but I went onstage and it was nothing like as bad as I’d initially imagined.

I reckoned that I could have done better, so I chose to do it again a few weeks later and came third in the seniors’ category—I was on a high following that! I went on to the national finals, held in Glasgow some months later, and I have to say it was a fantastic experience. I went for a further regional competition in 2010 and came third again!

You now know the man behind dpd555 as Dr. Dominic D’Agostino, associate professor at the University of South Florida. Can you tell me how you two ended up working together all these years?

In October 2010 there was a meeting about dietary treatments for epilepsy held in Edinburgh. I went to this and so did Dom, so we finally met in person at long last. This was a fantastic experience for me, as we’d communicated through Bodybuilding.com for four years and now we finally met face to face.

I found out he’d been using keto to help all sorts of people. These days, when one of them calls from this country, from the UK, he tells them, “Oh, well, you can talk to Mike.” The UK still hasn’t got hold of the keto label at all. It’s occasionally mentioned by people looking to lose weight, but for most, I’m some sort of outcast. 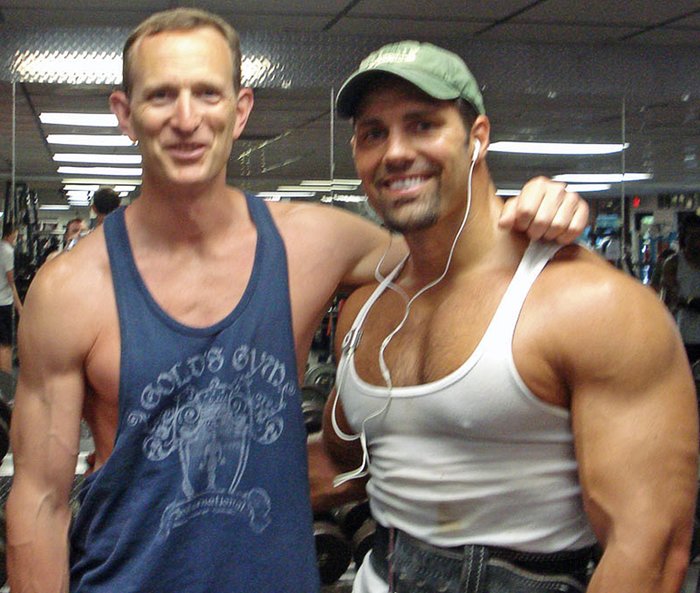 What’s it like trying to stick to such a strict, regimented diet in a place that doesn’t necessarily recognize it?

I guess I was lucky in some respects because the anti-epilepsy meds that I was given gave me all sorts of food intolerances. So, I’m quite content with my funny little world and the types of food that I eat.

It wasn’t that difficult for me to make this huge change to low carbohydrate, high fat. But for people who are suddenly told, “you’ve got to change everything you do,” it’s a paradigm shift. You have to change your whole mindset about how you approach foods.

What do you think makes the diet seem so crazy to others?

I think it’s crazy when it’s compared with the sort of classic approach to food that we have. There’s always been a historic fear of starvation where I live because everything tends to get imported. People still have this dread that we’re going to run out of food.

It’s funny, because Dom invited me to a conference in Italy, the land of tomatoes and pasta. I’m not in a position to change how I eat, so he just told me not to eat for five days—so that’s what I did. And it didn’t harm me in any way. It was a surprise, I have to say, because again, it argued with this classic model that I had grown up with, eating breakfast and a big evening meal and snacks. It showed me that it wasn’t that harmful to live without food for a couple of days.

It also changed some of the hormones in my head, the ones that help us feel full or feel hungry. Because Dom made me a guinea pig to see how humans in ketosis reacted to fasting, I tend to eat once a day at the moment, and it hasn’t harmed me. So, I’ve combined keto with intermittent fasting.

What are your recommendations for somebody who’s having to make such a huge change all at once?

Have the fear of losing your life. It also helps to have other guys around you who are trying something as crazy.

In the epilepsy world, they’ve been using a keto approach for 100 years now, which they’re very proud of. But even now, people are still given some pretty horrible services, medically, and I don’t think fear of side effects is the right way of encouraging people.

In the bodybuilding world, you become your own expert on what works for you through trial and error. I’ve found I do really well on keto.

What does a typical day look like for you now that you have 13 years of experience with keto?

As I mentioned, I eat one large meal a day. I ship my salmon in from Seattle and I’m quite happy with my avocados and coconut oil. I eat a ton of almonds, as well, and macadamias. I appreciate other people will need more variety in their food, that’s just what works for me.

You can approach it differently, you can have your three meals a day. You’ve got to be careful with the ingredients when you get started just to get into ketosis. You’ll learn what you can add, but that is part of learning how to turn on the ketosis. It becomes totally specific to you. Luckily, I do like coconut, which I’m so grateful for. I know many other people don’t, and they use MCT oil instead.

I also eat things like asparagus and broccoli. I don’t need that many raw vegetables, but I do eat sprouts and leafy greens. Again, very similar to a bodybuilder.

What do you believe the future holds for you?

I get sort of invited out every other year to be part of whatever Dom’s latest sort of research thing is. I was video chatting with him the other day, and I commented on a model of a Saturn 5 rocket on a shelf in his living room. He said, “Oh yes, that’s because we’re doing research with NASA.”

I guess they’re doing research to see if people could make it to Mars using a keto diet. So, who knows, maybe I’ll be his guinea pig again.

5 things you may not realise are sabotaging your workout

Training is all about getting the best bang for your buck. Head Trainer at the Australian …

The latest international news , featuring top stories from around the world and breaking news from trusted sources. The materials published on this website do not belong to us, they come from the source feeds of some famous websites.
© Copyright 2021Xania News. Created by Xania Media